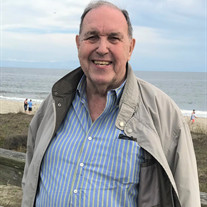 Donald "Dandy Don" Frank Parker, 86, of Mooresville, passed away on Tuesday, April 5, 2022. He was born on October 15, 1935 in Mooresville, NC, to the late Fred and Lena Troutman Parker. Don was a graduate of Mt. Ulla High School and received his Associates degree from Mitchell College in 1963. He started his working career as an electrician at EF Belk & Son then worked with and sold appliances for many years; working at Sears until 1975, Piedmont Appliances which became Parker Brawley Appliances until 1989, and later Lowes Home Improvement in Mooresville. He attended Broad Street United Methodist Church and Williamson's Chapel United Methodist Church in Mooresville. Don was a lifetime member of the Mooresville Civitan Club and the Mooresville Jaycees; where he was honored with numerous awards within the clubs. Serving as the Easter Seals VIP fund raiser, he was honored for raising over $100,00 for the organization. You would always see him out in the community selling and raising money for some club or a good cause. In 1994, he received Citizen of the Year Award from the Mooresville Chamber of Commerce. In addition to his parents, he was preceded in death by his wife, Sondra Sherrill Parker. He is survived by his children, Michael Parker (Sarah), Jill Parker Lowe (Robbie); siblings, Rev. M. Joe Parker, Jane Kiker (Bill), Margaret Murdock (Jim), Allen Parker (Margaret); grandchildren, Kramer Lowe (Casie), Sydney Caulder (Caleb), Allison Shaver (Reid), Ben Parker, Rebecca Tortorell (Mike); great grandchildren, Zane, Evie, Blakely, Foster, Theo, Adalynn, Emerson, and Parker; and numerous nieces and nephews. The family will receive friends on Friday, April 8 from 6:00-8:00 PM at Cavin-Cook Funeral Home. Funeral services will be held at 3:00 PM on Saturday, April 9 at Williamson's Chapel United Methodist Church, Mooresville, with Rev. Mark Pitts officiating. Burial will follow the service at Glenwood Memorial Park. In lieu of flowers, memorials may be made to Broad Street United Methodist Church, 355 S Broad St, Mooresville, NC 28115 or Hope of Mooresville, PO Box 434, Mooresville, NC 28115 (https://www.hopeofmooresville.org/donate) Cavin-Cook Funeral Home & Crematory, Mooresville, is serving the Parker family. Condolences may be made to the family at www.cavin-cook.com.

Donald "Dandy Don" Frank Parker, 86, of Mooresville, passed away on Tuesday, April 5, 2022. He was born on October 15, 1935 in Mooresville, NC, to the late Fred and Lena Troutman Parker. Don was a graduate of Mt. Ulla High School and received... View Obituary & Service Information

The family of Donald "Dandy Don" Parker created this Life Tributes page to make it easy to share your memories.

Send flowers to the Parker family.