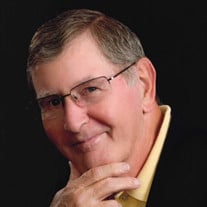 David Porter Gilmer, 80, of Mooresville, NC, passed away on Sunday, October 3, 2021, at Harris Hospice Unit at Presbyterian Medical Center, Charlotte. He was born on January 29, 1941, in Bristol, TN to the late John Axley Gilmer and Ella Porter Gilmer. In addition to his parents, David is preceded in death by a brother, John Gilmer and a sister, Mary Jane Broome. He was Regional Manager for the Worker's Compensation Division of GAB Robins, Inc., prior to his retirement. He attended NC State University. David was a member of Central United Methodist Church where he was a member of the Willing Workers Sunday school class. He was also a former financial officer of the church and sang in the Sanctuary Choir. He was a member of the Lake Norman Golden Boys Club. David was an avid golfer, enjoyed fishing and was a member of the Roswell Bass Club, Roswell, GA. He also enjoyed yoga. David is survived by his loving wife, Sandra Berry Gilmer; daughters, Cindy Gilmer of Seattle, WA and Annie Yount (Rodney) of Catawba, NC; brother, Harry Gilmer (Jackie) of Jackson, MS; grandchildren, Jessica Swain (Cameron) and Justin Yount (girlfriend, Rachel); 3 great-grandchildren and his furry best buddy, Leo Boy. A Memorial Service will be held on Thursday, October 7, at 2:00 PM at Central United Methodist Church with Rev. Ross O'Neal officiating. Visitation for family and friends will be one hour prior to the service from 1-2 PM. A mask is required. Inurnment will be after the service in the Gates Memorial Garden. In lieu of flowers, memorials may be made to Piedmont Animal Rescue, 228 E. Waterlynn Rd, Mooresville, NC 28117, or Central United Methodist Church, 214 N. Academy St, Mooresville, NC 28115. Cavin-Cook Funeral Home and Crematory, Mooresville, is serving the Gilmer family. Condolences may be sent to the family at www.cavin-cook.com.

The family of David Porter Gilmer created this Life Tributes page to make it easy to share your memories.

David Porter Gilmer, 80, of Mooresville, NC, passed away on Sunday,...

Send flowers to the Gilmer family.