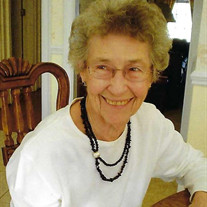 Clara Mae Whitley passed away on December 13, 2021, surrounded by her family. She had been in declining health for a several years. She was born in Charlotte, NC, to the late Mamie Corinne Deese Whitley and William Lee 'WL' Whitley. In addition to her parents, she is preceded in death by her six siblings, Mildred Whitley Whitaker (Broadus), Francis Whitley Craddock, Harold Whitley, Kenneth Whitley (Nancy) and Billy J. Whitley. She is survived by her sister-in-law, Nancy Whitley-Garner, along with numerous nephews and nieces. She was preceded in death by a niece, two days before her death, Judith Eason Barnes (Mitchell) who she helped raise. In June 1941, Clara's family moved to Elizabeth City where her father, 'W.L', along with Christopher Eason and Broadus Whitaker, help build the Blimp Base in Virginia Beach in the late forties and fifties. They lived on the Perry Farm during this time. She graduated in 1950 from Central High School in Elizabeth City. Her high school senior photo indicated she was a member of the 4-H Club, Editor-in-Chief, Glee Club, Junior Varsity, Class Officer, FHA, Student Council, and bus driver. She was the first female bus driver in Pasquotank County. The family moved to Wilmington, NC so W.L. could be near the work for the war effort. In the mid-fifties, the family moved back to Charlotte and remained on Cama Street until W.L. and the boys built a new home on Delshire Lane. She has resided in this residence since the late sixties In the mid 1950's after returning to Charlotte, Clara served as Secretary of the AFLCIO Local 413 Local Iron Workers Union on Commonwealth Ave., where the Union was located. In 1963, she and J.E. McElduff, who was President of the Local Union left the Local Iron Workers Union and formed International Steel Erectors. She served as the Corporate Secretary, Co-Owner and then as President until her retirement in 2005. In her senior yearbook, she was described as 'The little girl with a great big heart'. This sums up Clara as she would aid anyone in need - giving freely of her time and money to aid others. She might have been small in stature, however, she sure could make the big burly steel worker shake when she summoned them into her office. Whenever she was out dinning and saw a uniform (military, fire, law enforcement) she would silently pickup their meal tickets from the waitstaff and they would never be the wiser as to whom had picked up their tab. She had a big heart and loved her family, neighbors, and her Church Circle Group. She took several European tours with Judy and David Sims and later with her niece, Judy Barnes. She loved to travel, and her favorite spot was the condominium in North Myrtle Beach. Clara was a true Southern Lady bound by a strong work ethic and desire to do the best for her clients. Her greatest love was reading, all sports on TV and just maybe a few game shows. She was one of the original ticket holders of The Charlotte Hornets Basketball Team. Her home was 'The family gathering place' for all occasions. She was the glue that held this widespread family together. Thanksgiving was always special for the whole family as Clara would take one of the company trucks with all the children to watch the parade and then back to her house for a big lunch. Clara will be missed by all, but now she is seeing her family again along with welcoming Henry, Judy and Adam in heaven and keeping them close. A strong loving lady who stood with her head high and marched to her own drummer. A Celebration of Clara's Life will be held on Friday, March 4, at 2:00 pm, in the Chapel of Cavin-Cook Funeral Home. Visitation for family and friends will be immediately following the service. For those who are unable to attend the service, you may go to the following link for the live stream https://view.oneroomstreaming.com/authorise.php?k=1646432251170743 In lieu of flowers, memorials may be made to Steele Creek Presbyterian Church, Circle of Friends or Carmel Christian Academy. Cavin-Cook Funeral Home and Crematory, Mooresville, is serving the Whitley family. Condolences may be sent to the family at www.cavin-cook.com.

Clara Mae Whitley passed away on December 13, 2021, surrounded by her family. She had been in declining health for a several years. She was born in Charlotte, NC, to the late Mamie Corinne Deese Whitley and William Lee 'WL' Whitley. In addition... View Obituary & Service Information

The family of Clara Mae Whitley created this Life Tributes page to make it easy to share your memories.

Send flowers to the Whitley family.