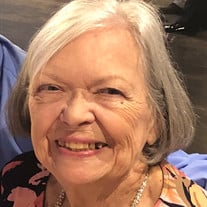 Carey Sherrill Meacham December 22, 1933 – February 1, 2021 Carey Sherrill Meacham, 87, of Terrell NC, joined her Lord in heaven on February 1, 2021 after living a long life satisfied according to Psalm 91:16.  Carey Elizabeth was born in Gaston County and grew up in Lincoln County’s Lowesville community, graduating from Rock Springs High School and attending Salem United Methodist church.  She was a dental assistant in several NC & SC cities, including serving as Vice President of the NC Dental Assistants Association; then in administration at Montague Industrial in Florence SC where she lived for most of her married life.  However, her family “career” was much more meaningful and impactful than her professional one as she honored the “Care” in her name to the fullest extent. Sister/Aunt Carey loved and helped raise three generations of children in her family.  She was the second of nine children born to Wilbur & Margie Luckey Sherrill; and at a very young age, began caring for her siblings that ranged from 3 years older to 17 years younger than her.  Since she lived with her parents until she married at age 41, she was available to help tend to all 17 nieces and nephews through the revolving door of family visits to the Sherrill home.  Christmas season was always extra special because shopping was Carey’s passion – whether it was buying Santa’s presents for her siblings growing up or buying all those nieces and nephews presents signed “from Grandpa and Grandma” for many years. The next generation included 24 great nieces and great nephews, six of which were local in Terrell and fortunate to have her in the stands watching their athletic, cheerleading and theatrical performances; or sharing a bowl of ice cream or a Dr. Pepper at her suggestion, instead of doing homework!  She will be so missed by all, including many extended family members and friends, and especially during Rock Springs Camp-meeting each year which she enjoyed tremendously. The Sherrill family wishes to give special acknowledgement and thanks to nephews Michael and wife Robin Kiser & Earl and wife Cheryl Kiser, brother Gary Sherrill and niece Angie Stroupe for opening their homes and serving as primary caretakers during Carey’s last thirteen years on this earth.  All that she ever desired was to spend her latter years with family and you made her dreams come true. In addition to her parents, she was preceded in death by her husband Bernie Meacham and beloved beagle dog Princess; brothers Billy Sherrill (& wife Peggy) and Wade Sherrill; and brothers-in-law Ben Wright and Carl Nixon.  She is survived by brothers Donald Sherrill (Barbara) of Pawleys Island SC, Steve Sherrill (Judy) of Hickory, and Gary Sherrill of Mooresville; sisters Barbara Wright & Patricia Nixon both of Mooresville, Cheryl Jackson (Phillip) and sister-in-law Barbara Marshall Sherrill both of Charlotte. A Celebration of Life memorial service will be planned in the future.  In lieu of flowers, memorials may be made to Carolina Caring, 3975 Robinson Road, Newton, NC 28658.  Cavin-Cook Funeral Home & Crematory, Mooresville, is serving the Sherrill family. Condolences may be made to the family at www.cavin-cook.com.

The family of Carey Elizabeth Meacham created this Life Tributes page to make it easy to share your memories.

Send flowers to the Meacham family.