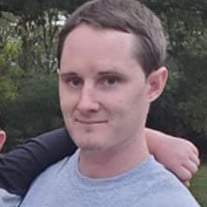 Brandon Shawn Terry, 29, of Clemmons, North Carolina, passed away on February 22, 2022. He was born on July 9, 1992 in Iredell Co., NC to Mendee Ball McCrary and Gregory Shawn Terry. Brandon enjoyed riding motorcycles, fishing, and working on cars. He loved to make people laugh and was a real prankster. Brandon was always 15 minutes late in everything he did, but he was a hard worker and highly respected by his co-workers and customers. He had a big heart and especially loved his family and spending time with them. He was a great dad. His family and friends loved him and he will be deeply missed by all. Brandon was preceded in death by a brother, Gregory Lee Terry; and his maternal grandparents. He is survived by his mother, Mendee Ball McCrary and step-father, Sam; father, Shawn Terry and step-mother, Dana; fiancé, Alaina Boyles Terry; children, Camron Gregory Terry and Kaydance LeAnn Terry; siblings, Chasitie, Hailey, and Colten Terry and Jordyn Williams; grandparents, Lee and Brenda Terry, and Carol Christy; nieces, Blaisleigh Ann and Marlee Rose; and nephew, Kerraz Nathaniel. A visitation will be held on Monday, February 28, 2022 from noon-1:30pm at West Corinth Baptist Church, Mooresville, NC. A funeral service will follow at 1:30 PM with the Rev. Robert Suttles officiating. Burial will be at Rowan Memorial Park, Salisbury, NC immediately following the service. In lieu of flowers, memorial contributions can be made to Cavin-Cook Funeral Home & Crematory, PO Box 977, Mooresville, NC 28115, (704) 664-3363, to help with funeral expenses. Cavin-Cook Funeral Home & Crematory, Mooresville, is serving the Terry family. Condolences may be made to the family at www.cavin-cook.com.

The family of Brandon Shawn Terry created this Life Tributes page to make it easy to share your memories.

Send flowers to the Terry family.