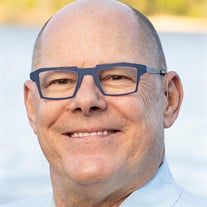 Ben Spears Thomas, cherished friend, father and husband, born on December 3rd, 1957 completed his life's journey on Saturday, March 6th in his Mooresville, NC home. Ben passed suddenly and unexpectedly during a cardiac arrest. He is survived by his loving mother, Ann McClain, his brother and sister, Liza Stevens and Scott Thomas, his wife and soulmate, Angela McConnell and his two children, who were his pride and joy, Mary Taylor Thomas and Will Thomas. Ben, although born in Memphis, Tennessee, grew up and called Baton Rouge, Louisiana home. He attended Lee High School before enrolling at Louisiana State University, the college where both of his children currently study. Ben bled purple and gold, and every Saturday you could find him and his children cheering the Tigers to victory. Although Ben feared he had gotten his children hooked on LSU football at a young age, it brought him much pride and joy to see Mary Taylor and Will continue his legacy at his alma mater. At LSU, Ben was a member of the Kappa Alpha Order, and graduated with a Bachelor of Science degree in Nuclear Science. After college, Ben worked for a short period on the River Bend Project, where he honed his people skills by calling on state and local representatives. Ben then explored his passion for law, and graduated from Louisiana State University's Law School in 1989. After law school, Ben followed his mother to Mooresville, NC, where she had moved after her marriage with Bill McClain. Bill was an important member of the Mooresville community, and Ben used him as a mentor and an idol. Ben met his wife, Angela, at a Habitat for Humanity meeting, and their love quickly blossomed. Ben was known to date many girls at once, but when he met Angela, he had found his soulmate. Not only was Ben a great husband and father, he was a self described Renaissance man. Ben was an avid scuba diver, pilot, sailor and world traveler, and could often be seen flying his seaplane around Lake Norman. His greatest joy was being able to take his family on all of his adventures with him. In the Mooresville community, Ben created a successful real estate law practice, which is now succeeded by his partner, Tiffany Webber. Ben often called Tiffany, and her husband, Ryan Webber his second children or "the kids", and he loved them dearly. Ben saw many of his same characteristics, and an immense drive, in Tiffany, and was proud that he would one day retire and use her as his attorney. Ben was also the Past Local Director of the Catawba Valley Bank, Past Local Director of Bank of Iredell, past president of the Mooresville Rotary Club, Past Membership Development Vice President of the Mooresville/South Iredell Chamber of Commerce, Past Vice President of Habitat for Humanity, Past Director of the Mooresville YMCA, Past President and Board Member of the Mooresville/South Iredell United Way and the Past Director of the Rotary STARS Program. Ben was often seen as a larger than life figure in the local community. He always had a keen ability to keep everyone on their toes, he would light up a room with laughter. Ben was also immensely generous, and he never met a stranger. His ability to see past differences, keep an open mind, give everyone the benefit of the doubt and never hold a grudge are traits that everyone who knew him aspire to emulate. Although Ben is no longer here with us, his legacy will be passed down for generations within his friends, family and the entire Mooresville Community. In lieu of flowers being sent, Ben and his family would ask that donations be made to Habitat for Humanity. https://habitatcharlotteregion.lightning.force.com/lightning/r/Report/00O0G000006qPioUAE/view?queryScope=userFolders www.habitatcltregion.org/support A small service will be held this week for Ben, as he would not want a large gathering during the COVID-19 pandemic. Later this year, when more people are vaccinated for the virus, Ben's friends and family will host a large celebration of life for him. Knowing Ben, he would want nothing more than his friends and family to have a party in his memory with a very good Cabernet being served. Cavin-Cook Funeral Home, Mooresville, is serving the Thomas family. Condolences may be made to the family at www.cavin-cook.com.

The family of Ben Spears Thomas created this Life Tributes page to make it easy to share your memories.

Send flowers to the Thomas family.