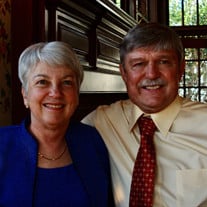 Barbara Jane Amann Mayer, aged 72, passed away on August 14, 2021, in Mooresville, North Carolina. The beloved wife of Donald G. Mayer, Barbara was born in 1948 to Bernard Joseph Amann and Grace June Ruebe Amann in Evergreen Park, Illinois. Barbara was a graduate of the Academy of our Lady (Longwood Academy) High School, Marquette University in Milwaukee, Wisconsin, and she also earned a graduate degree from Governors State University in University Park, Illinois. She married Donald Gene Mayer in 1971, at Sacred Heart Parish in Palos Hills, Illinois, and the couple relocated to Mooresville, North Carolina in 1982. Barbara was an avid reader, talented writer, and an award-winning poet. She was a reporter and feature writer for several publications, was an administrative assistant for Fieldstone Presbyterian Church for many years and also worked for the Town of Cornelius. An equestrian, dog and nature lover, Barbara and husband Don had many friends at the stables where they kept their horses and they worked with an equine therapy group. She and husband Don were service-oriented, compassionate people, and she was involved in activities at St. Therese Catholic Parish in Mooresville and was a long-time singer in the choir. Barbara is survived by sisters, Nancy M. King and Jeanne Belanger as well as nieces and nephews, including Colleen Qazi, Daniel King, plus several grand-nieces and nephews, as well as many devoted friends. A Memorial Mass will celebrate Barbara and husband, Don's life on Saturday, October 16, at 11 a.m. at St. Therese Catholic Church in Mooresville. This date commemorates the couples' Golden 50-year anniversary.The broadcast can be accessed LIVE from this page on our website: https://sainttherese.net/mass-livestream In lieu of flowers, memorials may be made to Rescue Ranch, 1424 Turnersburg Hwy., Statesville, NC 28625 or St. Therese Catholic Church, 217 Brawley School Rd., Mooresville, NC 28117. Cavin-Cook Funeral Home and Crematory, Mooresville, is serving the family of Barbara Mayer. Condolences may be sent to the family at www.cavin-cook.com.

The family of Barbara Jane Mayer created this Life Tributes page to make it easy to share your memories.

Send flowers to the Mayer family.