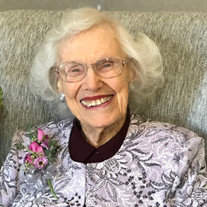 Annie Moore Griffith Cleary "Anne" November 5, 1919 - January 26, 2022 102 year, 83 days of "Always Family, Always Love" A true Davidson native, Annie Moore Griffith Cleary was born in a home on South Street on November 5, 1919, not far from the land where her parents, Mabel and Thomas Moore Griffith, would later build what would become the family home. Anne, as she came to be known, was born the 4th of the 12 Griffith children. She enjoyed the happy, lively home and dairy and treasured relationships with her sisters and brothers through all her years. After attending Mitchell College in Statesville, Anne began working in Charlotte for the FBI. In May 1944, "the War Years," during a trip to Myrtle Beach, SC, Anne met a very gregarious young (Yankee!) Army officer named Daniel Joseph Cleary Jr, a native of Washington, DC. He quickly became "the Love of her Life" and they married in June 1946 at Saint Peter Catholic Church in Charlotte following his return from WWII service in Europe. So began their amazing 62+ year love story together until Dan's death in 2008. Anne was the rock that kept their home and their 4 children together, happy, healthy and secure during all Dan's military assignments and moves. After raising their family and embracing retirement, Anne and Dan built their dream home on the shores of Lake Norman and treasured their relaxing days and beautiful sunsets not far from Anne's birthplace. These golden years included many memory making visits with their expanding family through the seasons and celebrations of Life! Anne was a devoted, strong and loving wife and mother. She taught her family so much and always led by her sweet example. Not the least of which was that proper English does include the word "Ya'll". Anne continued these qualities as a Grandmother and Great-Grandmother, never forgetting a Birthday, Graduation or Anniversary. So proud of her Griffith heritage, and much like her mother, Anne was always a lady, always stylish, and always welcoming to friends and family in her home and at her breakfast room table throughout her long life. She loved God, her home state of North Carolina and all of her family completely, and leaves them already missing her sweet hugs and radiant smile. Anne has left to cherish her memory sons Daniel Joseph Cleary III and his wife Susanne, Michael Thomas Cleary Sr and his wife Linda, daughters Mary Elizabeth Cleary Vinson and her husband Robert, Patricia Anne Cleary Butler and her husband Jay, 6 Grandchildren: Daniel S. Cleary, Dawn Cleary Cromer [Damond], Meagan Cleary Johnson [Brett], Brenna Cleary Burkhalter [Josh], Elizabeth Cleary Samuels [Scott], and Michael Thomas Cleary Jr [Morgan]. 10 Great Grand Children: Caleb Gresham, Cael, Carter and Easton Cromer, Autumn and Connor Johnson, Cullen Burkhalter, Michael Thomas III and Peter Cleary and Judah Samuels. Her life has been blessed by the friendship of extended family who survive, her sister Mary Lee Griffith Smith, brother Ben D. Griffith and his wife Vicki, many nieces and nephews, and all of her Cleary in-laws. Anne was preceded in death by her husband, Daniel J. Cleary Jr, her parents Annie Mabel [Garrison] and Tom Griffith, 3 sisters, Dorothy G. McLaughlin, Eva G. Cathey and Mildred G. Sperry; 6 brothers, Thomas Hunter Griffith, John Franklin Griffith, Jack Garrison Griffith, George Robert Griffith, Melvin Stewart Griffith and William Richard Griffith. What an amazing Homecoming this must have been for Anne! Anne's life of Family and Faith will be celebrated at her parish Saint Therese Catholic Church in Mooresville, NC on First Friday, February 4, 2022. Visitation with family: Noon to 1:15 in Church Narthex, followed by Holy Mass at 1:30 and procession to Mimosa Cemetery in Davidson, NC for burial just a short distance from her childhood home to rest near her parents and extended family at approximately 3:00 pm. Anne's family would be appreciative for Memorial donations to the following recipients: Sainttherese.net and MiraVia.org. The Cleary family is being served by Cavin-Cook Funeral Home, Mooresville. Condolences may be made to the family at www.cavin-cook.com. For those who are unable to attend the service, you may go to the following link for the live stream https://view.oneroomstreaming.com/authorise.php?k=1643676935163612

The family of Annie Moore Griffith Cleary created this Life Tributes page to make it easy to share your memories.

Send flowers to the Cleary family.