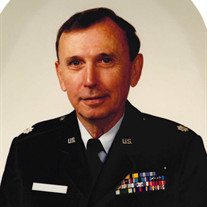 Allen E. Massey passed away, peacefully, on May 17, 2021 after an eight year battle with Myelodysplastic Syndromes (bone marrow cancer). He was born in Statesville, NC on September 24, 1934 to the late Mary M. Massey and Hoyle E. Massey. He graduated from Scotts High School, Scotts, NC in May 1952. Then in November 1952 he enlisted in the North Carolina Air National Guard, Charlotte, NC. He served continuously as a Personnel Technician. Later he attended the Air National Guard Academy of Military Science at Knoxville, TN, and appointed commissioned officer. He had a long and successful career in the NCANG, retiring in 1990 as Personnel Officer and as Chief of the Consolidated Base Personnel Office with the rank of Lieutenant Colonel. He received many awards and decorations during this time. He was a member of the NCANG for 38 years and worked full-time for 36 years. He married his wife, Nancy Safrit Massey, in 1956. Had he lived they were looking forward to celebrating 65 years together in October. They have one son, Robin D. Massey, (Shari) and one granddaughter, Chloe Massey Chuby, (Tyler). Surviving, also, are two brothers, Jack H. Massey (Laurieann), and Bobby J. Massey. Preceding him in death are his parents, Hoyle and Mary Massey, brother, Gary D. Massey and two sisters-in-law, Mary Massey and Becky Massey. He has been a member of Broad Street United Methodist Church, Mooresville, NC from 1956 to present. The family will receive friends on Sunday, May 23 from 2:00-3:00 PM with a service following at 3:00 PM at Broad Street United Methodist Church. Burial with full military honors will follow the service at Glenwood Memorial Park. For those who are unable to attend the graveside, you may go to the following link for the live stream https://www.facebook.com/CavinCookFuneralHomeServices/ Memorials may be made to Broad Street United Methodist Church, 355 South Broad Street, Mooresville, NC 28115 or Hospice & Palliative Care Lake Norman, 705 Griffith Street, Suite 203, Davidson, NC 28036. Cavin-Cook Funeral Home & Crematory, Mooresville, NC is serving the Massey family. Condolences may be made to the family at www.cavin-cook.com.

Allen E. Massey passed away, peacefully, on May 17, 2021 after an eight year battle with Myelodysplastic Syndromes (bone marrow cancer). He was born in Statesville, NC on September 24, 1934 to the late Mary M. Massey and Hoyle E. Massey. He... View Obituary & Service Information

The family of Allen Eugene Massey created this Life Tributes page to make it easy to share your memories.

Send flowers to the Massey family.